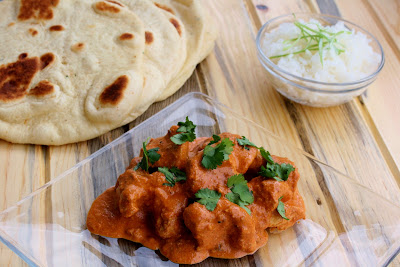 Chicken tikka masala is a curry dish of roasted chicken chunks (tikka) served in a rich-tasting red or orange-colored sauce. The sauce is usually creamy, lightly spiced and contains tomatoes. Chicken tikka masala has been found the most popular dish in British restaurants and it has been called a "a true British national dish."

The origins of chicken tikka masala are disputed. An expert on street food declared that the dish originated in Punjab during the last 50 years. Another view is that it originated in the first Indian restaurants in Soho, London, during the 1970s.  All I know is whoever invented this, thank you...

2. Preheat a grill for high heat.

3. In a large heavy skillet over medium heat melt butter. Saute garlic and jalapeno for 1 minute. Stir in cumin, paprika, salt, and garam masala. Stir in tomato sauce and cream. Simmer on low heat until sauce thickens, about 20 minutes.

4. Lightly oil the grill grate. Thread chicken onto skewers, and discard marinade. Grill until juices run clear, about 5 minutes on each side.

5. Add grilled chicken to the sauce mixture and simmer for 10 minutes. Transfer to a serving platter, and garnish with fresh cilantro. Serve with naan bread and some jasmine rice, enjoy, and eat till your hearts content!!!

Mmmm it was! My husband was impressed again :) Two nights in a row of new food and he loved both of them! A little too spicy for my girls, so next time I will tone it down for them and add spice in the end for us...but I will definately make this again and again!

Cheri- do you make your own naan? If so have you posted your recipe?

I did make it, and no I haven't posted it yet but will asap! Very easy to make and so delicious...

Show Us Your Pans Giveaway 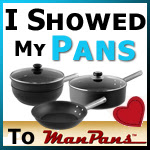